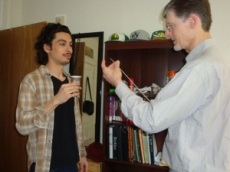 “Passing on the baton” to Alex at Berklee

Wes Dyring’s numerous arrangements, transcriptions and orchestrations encompass five hundred years of music and include a wide diversity of composers and styles.

Wes’ orchestrations include music by The Beatles and King Crimson, settings of Bulgarian folk music, baroque works by Sweelinck, Bach and Handel, as well as music from the romantic era such as Schubert, Mendelssohn and Grieg, among others.

Various Dyring orchestrations have been performed or read on several occasions in Seattle, Cleveland and East Lansing. In 1977 he recorded his string orchestra version of the Bach g minor violin fugue while at Michigan State University, and in 2010 his family’s eight-member orchestra performed his setting of the Bach-Gounod Ave Maria in East Lansing in honor of his father’s 80th birthday.