Wes Dyring has hundreds of recording and other media credits in a diversity of genres. He has played in most of the Seattle Symphony’s compact discs and video productions, which have garnered twenty-one Grammy nominations, two Grammys and two Emmy awards. He has also played on Grammy-winning CDs with other artists.

In May 2014 the Seattle Symphony performed to great media fanfare at the Spring for Music Festival in Carnegie Hall, one of several orchestras selected for their interesting programs. The work at the festival garnering the most attention was Become Ocean by Alaskan composer John Luther Adams, a commission by Music Director Ludovic Morlot for the Seattle Symphony, for which won Adams the 2014 Pulitzer Prize for Music. The Symphony’s recording of this incredible work has just won a Grammy for Best Contemporary Classical Composition, the first Grammy award for the orchestra. Learn more

The Seattle Symphony launched the in-house recording label, SEATTLE SYMPHONY MEDIA, in 2014.  This exciting new venture reflects the highly acclaimed partnership between the Seattle Symphony and Ludovic Morlot. The first three releases feature both live and studio recordings of works by French and American composers, celebrating the flourishing relationship between a dynamic young French conductor and an American orchestra. Additional releases include an all-Fauré disc and a recording with Stravinsky’s Rite of Spring and Alexander Raskatov’s Piano Concerto, “Night Butterflies.”

The recordings have been engineered to audiophile standards and aim to capture as realistically as possible the sound of the orchestra performing on the Benaroya Hall stage, with naturalistic imaging, depth of field and dynamic range. Digital content will be available in four formats: stereo, “Mastered for iTunes,“ 96k 24-bit high resolution and 5.1 surround sound.

The Seattle Symphony has an extensive catalogue of over 140 recordings, which have garnered 18 Grammy Award nominations throughout its history. Click here to view the full catalogue on Naxos.

CDs may be purchased at Symphonica, The Symphony Store, at Benaroya Hall. Digital downloads and CDs are available through iTunes and Amazon, accessible through the Seattle Symphony website or by clicking on the images below. 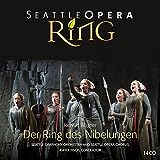 Wagner’s four-opera cycle, Der Ring des Nibelungen. Seattle Opera has now released a 14-album set of its 2013 Ring production through AVIE Records, which is available on both Amazon and iTunes. It can also be purchased through Seattle Opera’s Gift Shop.

Wes appears on Dave Matthews’ first solo CD, Some Devil, which won a Grammy in 2004 for “Best Male Rock Vocal Performance” for the song “Gravedigger.”
Click here for more information.

The original motion picture score for the 1996 movie Mr. Holland’s Opus, composed by Michael Kamen and recorded by the Seattle Symphony, won a Grammy for Best Soundtrack.
Find it on Amazon.